A year or so ago I acquired a Nikon 990 digital camera and thought a few of my tests and thoughts would be of interest. I first did a comparison between an image shot direct with the 990 and a tranny shot with an F4 and Nikkor lens. Both were hand held and were of a similar focal length. Then came a Dimage 7 followed by a Dimage A!. The Nikons D70, D200 and recently the D300 came next. The Casio F1 followed and then a Nikon P500. Latest are a Nex7 and a Fuji S1. You will find links to them at the bottom of the page 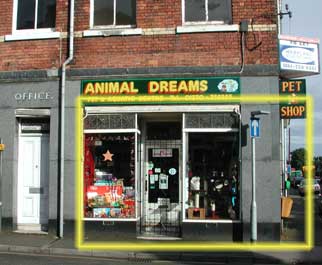 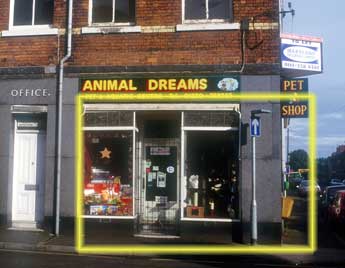 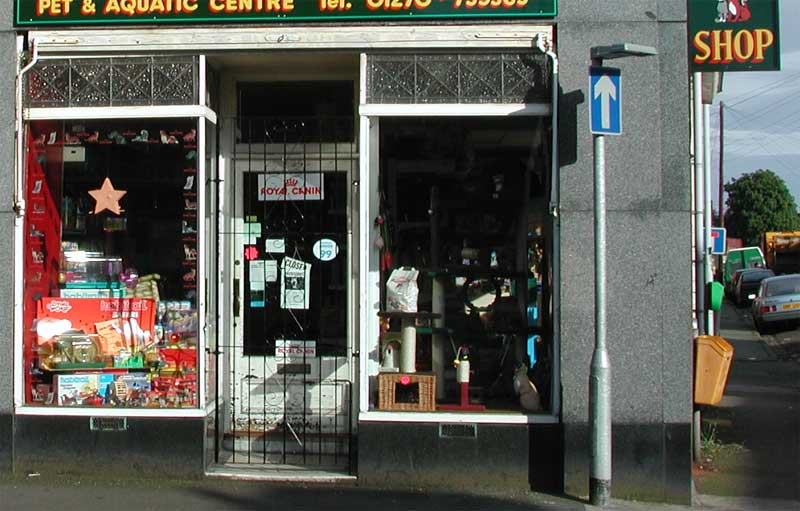 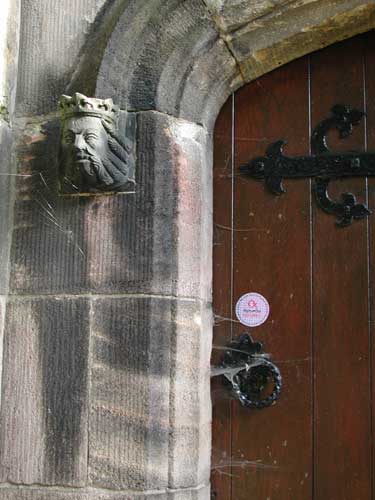 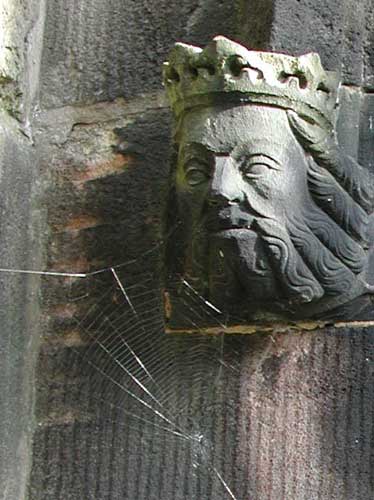 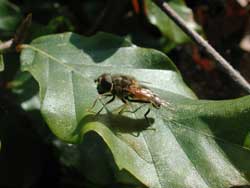 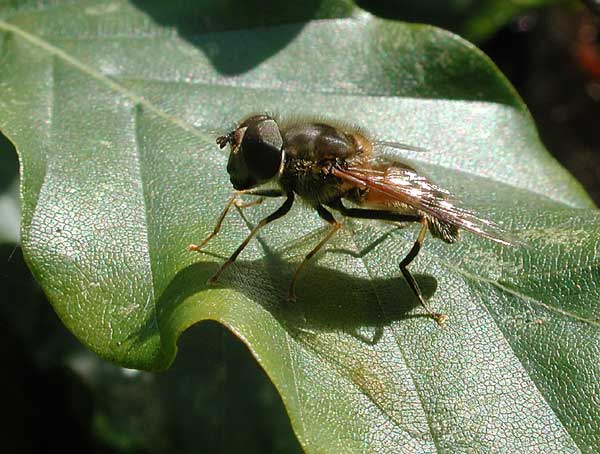 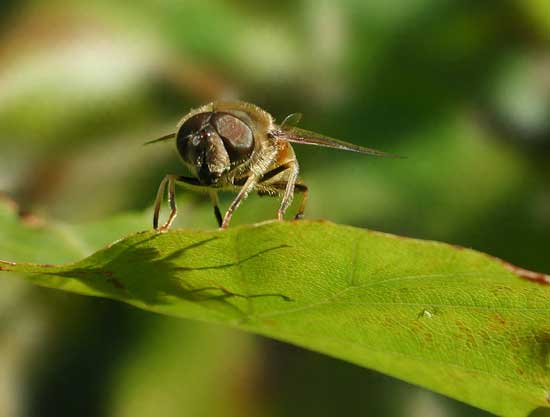 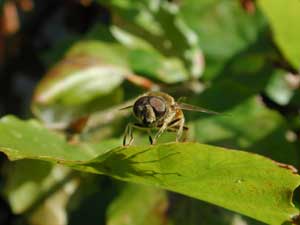 Not a straight shot of the fruit but using the 990 to copy a tranny. The lightsource was an old enlarger colour head turned upside down. The 990 was put onto a copy stand and the image linked to a colour monitor for viewing. A 35mm slide is placed over the lightsource and the 990 focussed to give a 1-1 copy. I have even gone closer to enlarge sections of a 35mm slide. So the 990 does a fair job of an all-round scanner. The image on the left was printed upto A3.

The close-up is a section enlarged in Photoshop from a 30 meg file produced from the Genuine Fractals plug-in.

Close-ups are great with the 990 and its ability to focus so close to objects is more than useful. Here are two shots I took in the garden to illustrate the point. Both are using available light and are hand held.

You may have noticed that the image on the left is not quite like the original.The background on the original is too distracting so I selected the backgound in photoshop and used gaussian blue to obtain a more pleasant image. Both images blow upoto A3 and you can even go bigger if you use the Genuine Fractals plug-in for Photoshop.

One problem you may come across when using the 990 in bright sunlight is the inability to see the image in the LCD screen as the optical viewfinder is not going to be all that accurate for close-ups. To get over the problem a very useful accessory -Xtend-a -View Pro comes into its own. This is a x2 magnifier and shade which can be temporarily fixed to the LCD by velcro .Details from http://www.eagleeyeuk.com. Its a bit tricky to get used to at first as it magnifies the texture on the LCD. It is certainly useful when using convertors which block the optical viewfinder.

Back to Digital Cameras 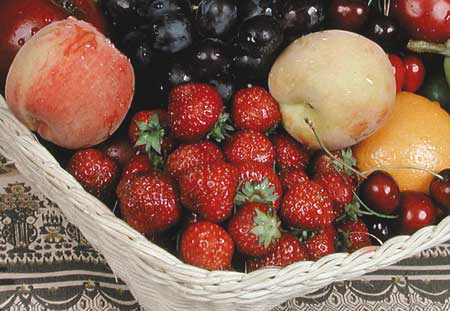 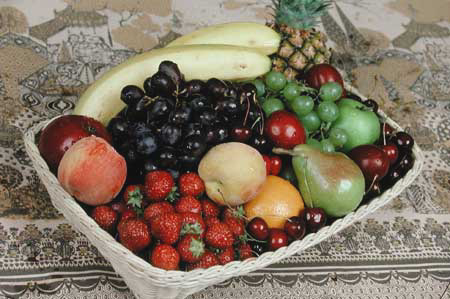 Recently I attended the unveiling of a blue plaque at his birth place in Hale, Cheshire to George Rodger one of the co-founders of Magnum. As you can see the weather was pretty awful but the 990 came through with flying colours. 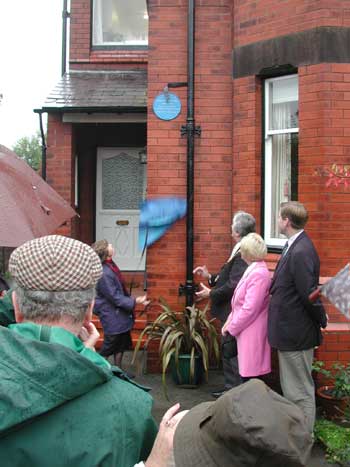 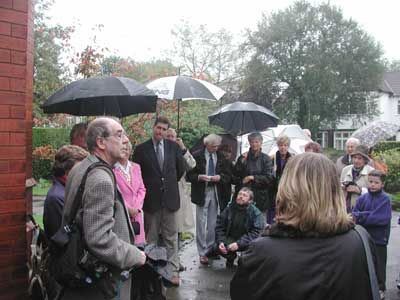 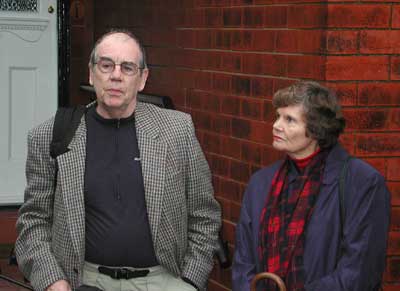 Above, Mrs Rodger is unveiling the plaque at 145 Hale Road, Altringham. On the right David Hurn of Magnum who had travelled from Cardiff for the occasion addressed the invited guests.

Four images taken with the 990 taken from Tower Bridge, London patched together in Photoshop.
Three excellent digital camera links for info on all the latest gear are http://www.steves-digicams.comhttp://www.imaging-resource.com and http://www.dpreview.com
check out my new digital garden pages -

An area of photography I have become hooked on recently is 'time lapse'. Up until recently unless you have been able to afford an expensive camera capable of taking one frame every second or so - and for many thousands of seconds it is beyond the reach of ordinary mortals!. Even the latest pro-am video cameras seem to have ommitted the time lapse feature from their specifications. My old Sony HI-8 did have some facilities but never down to individual frames and my experiments with it lacked the smoothness I wanted to achieve. Now this has changed.
Using the Nikon 990 with settings of 640 x 480 and low compression JPG's and pressing the exposure button every 5 seconds I was able to get about 650 images from a 64 meg card. Using Adobe After Effects I then imported the set of JPG's and ended up with a remarkable cloud time lapse sequence. You could probably use some other Video editing package such as Premiere -as long as it can export to AVI or Quicktime. To get it to play on the slowest computer I had to put the images through a Photoshop Action script reducing the size to 320 x 240.
Now I have started to use an interesting device from the States -the DigiSnap (http://www.Harbortronics.com) It is a tiny gizmo that is linked to the 990 with a USB to serial lead. It can remotely control the zoom on the lens and set in progress a time lapse sequence. Ideally to get a really smooth cloud sequence a frame rate of 1 every 2 or 3 seconds is best, but I have now done several with the DigiSnap that look pretty cool. As the clouds did not have much detail for jpeg compression I managed once to get 1950 shots from a 64 meg card at about 15 shots per minute. 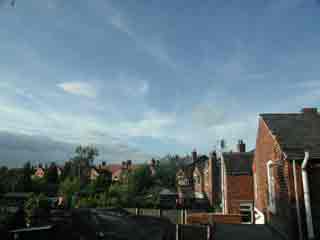 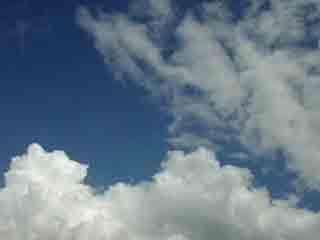 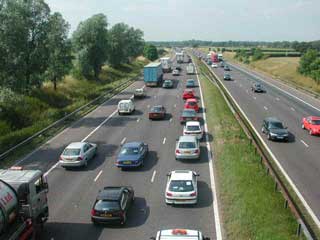 Just over 500 pictures in this test sequence. The original images reduced in After Effects and saved using the Indio 5.1 Codec.File size is 791 KB
I have used the 990 for shooting pictures at Man City home games and you can view the images at
cityback.htm
Because of its wider focal length range lens the Dimage 7 took over for soccer pics for a while -see citykeegan.htm
Now it's the D300
USA 2002
Dimage A1
Nikon D70
Nikon D200
Nikon D300 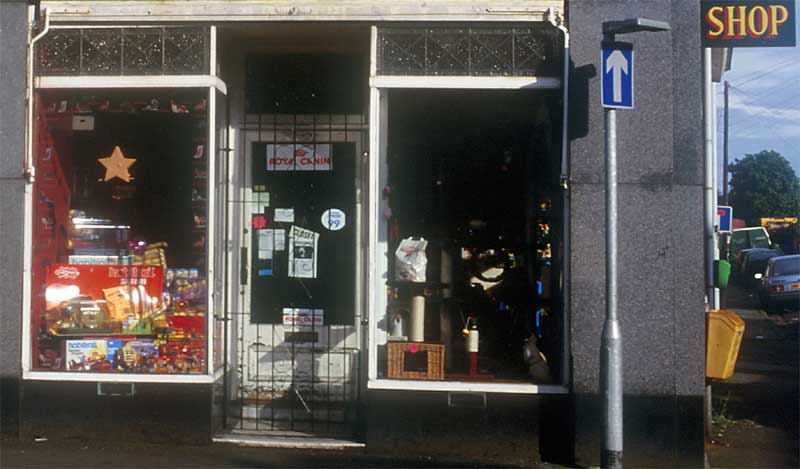