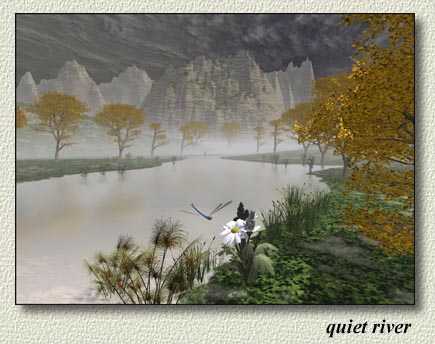 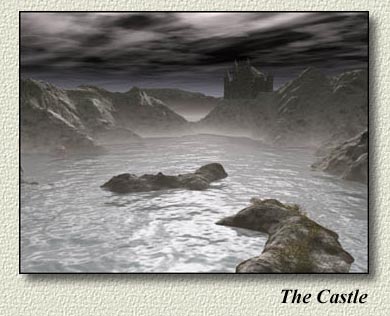 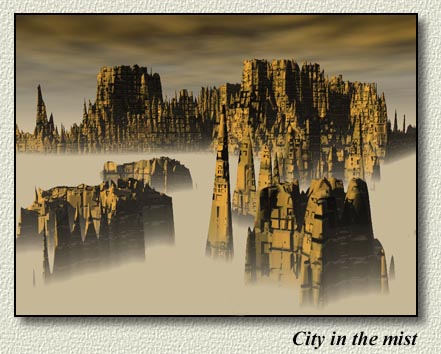 For the record the image on the left contained 59 objects,2 lights and nearly 11 and half million polys. The original was rendered at 3200 x 2350 with final (not ultra) anti-aliasing and took 26 hours on a 166 with 64 megs RAM. It blows up to A3 really well from a file size of 22 megs

All the objects in the scene are part of Vue D'Esprit. No post processing.

The castle on the hill was an import from Lightwave. An extra light was used to partially light some of the battlements.

Made from three imported similar Lyapunov images post processed in Photoshop and imported as terrains in the edit function.

The software generates a different version of the vegetation every time you load it into your scene which is really useful. The total number of polys in this scene is just over 4 million for the 25 objects.
The quality of the reeds in the foreground stands up pretty well even though the camera is quite close. The better the anti-aliasing quality the better the result though when using the ultra settings rendering time will be very long as I have found out ! On a 233 rendering of the original 3200 x 2400 image with 30 objects and 11 million polys took nearly nine hours 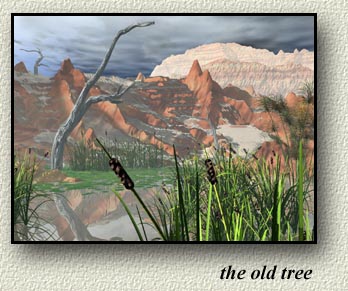 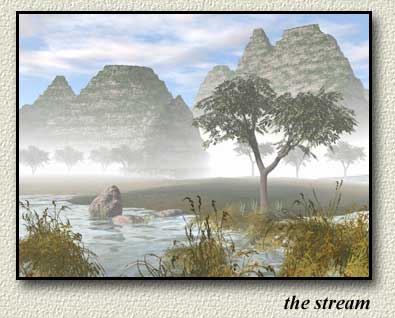 Terrain in background from filtered image produced in Photoshop. 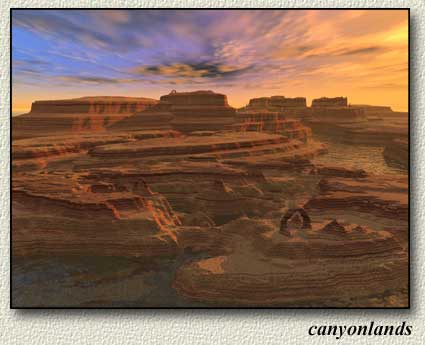 The mosque is an imported still shot in Jeddah, Saudia Arabia. Some post production needed to clean up the edge of the mask surrounding the mosque and the coastline in the foreground needed some work too. The moon too is an imported image. Small spotlights added for palms. Original 2400 x 1800 took about 17 hours to render the 5 million polys. 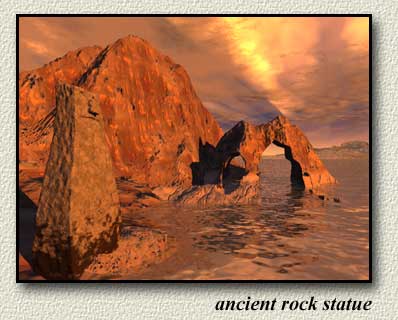 To form the arch the original terrain from Vue was exported as a Lightwave object, edited in Modeller with holes cut and brought back into Vue. The stone statue was modeled in Lightwave and imported into Vue

The footsteps were added by imported objects done in Lightwave. A tiny 'landscape' was exported to LW and then the footprint was cut out of it before importing back into Vue.

Snow on trees etc by editing their materials and by duplicating the object and having a 'heavy' snow texture on the duplicate. 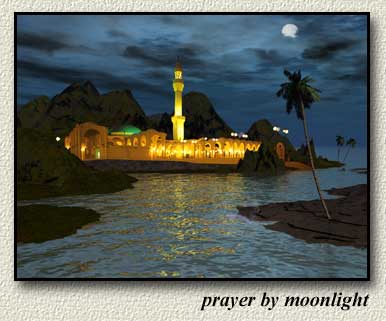 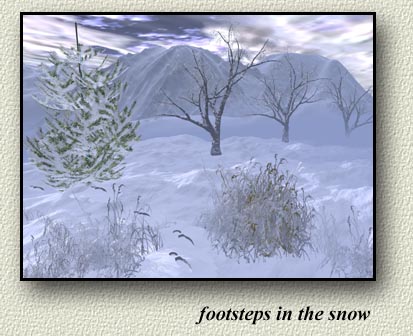 All terrains produced in Vue. 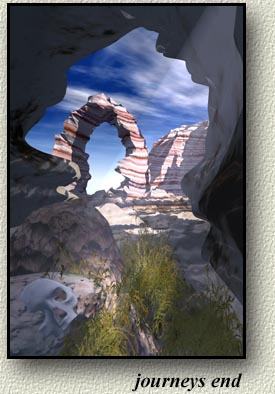 Arches were imported from Lightwave as was the part skull in foreground. 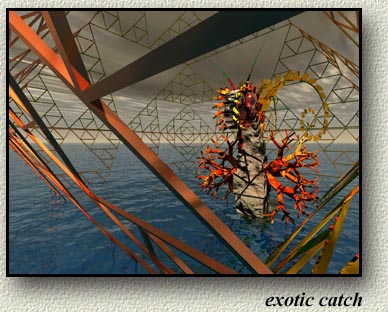 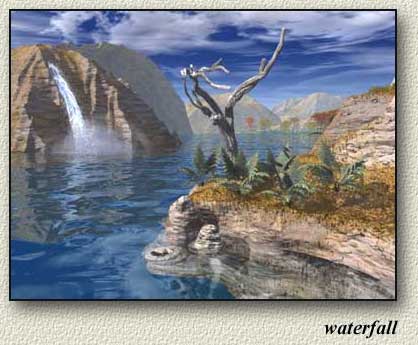 One of the opening frames from the opening of Fractal Quest my latest video. The original sequence was done in World Builder but I am redoing it in Vue. With the exception of some particle post production in Lightwave to get the spray in the waterfall all the rest is Vue. The first eight seconds comprises movement of the clouds,water reflections and waterfall.Then the camera moves into the scene. 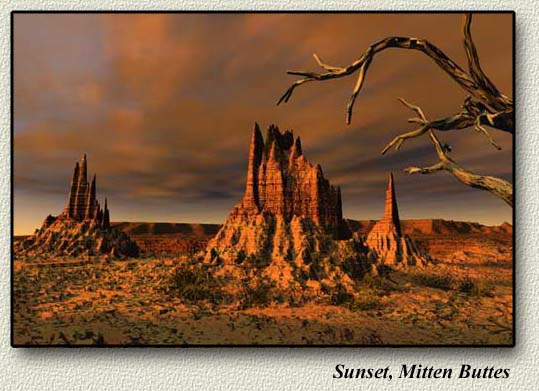 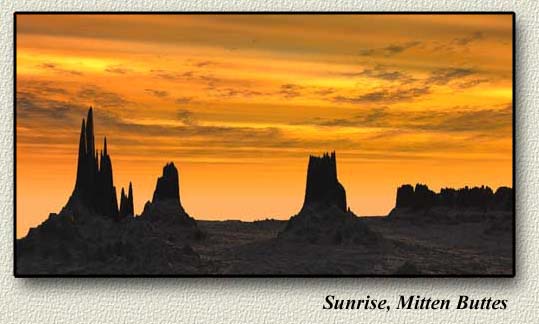 This is another Vue -sorry view of the Mitten Buttes. This time from the Visitor Centre.

Brings back memories of getting up early at Gouldings ready for the dawn over Monument Valley.

For those interested Monument Valley was the location for many Westerns, the first in 1938 - The Stagecoach 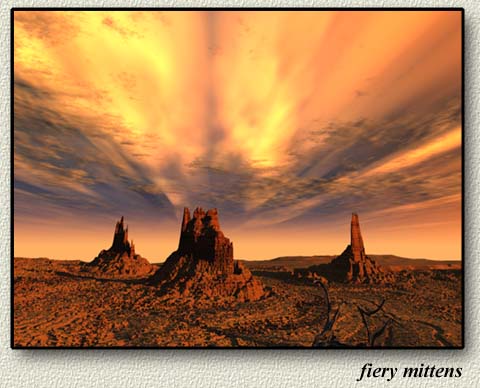 In experimenting with the cloud and atmospheric effects I came up with this sky on the right that gave the impression of fire emanating from the centre Butte. 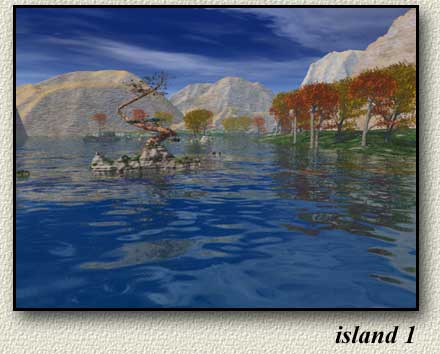 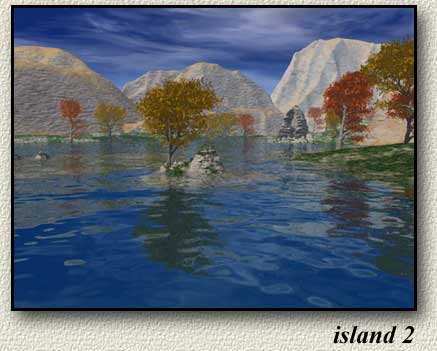 The camera has moved down the right right side of the water area and I added a couple of islands to add interest to the animation. This is the first coming up with the old tree - imported from World Builder. Clouds and water are still being animated.
The second island with the lone tree again breaks the journey along the right bank before reaching the arch. After passing through the arch the camera moves over a short stretch of water before going low over the rushes and rock and just clearing the trees heading towards the next section. An image of this new section will be placed online shortly. On the re-render of this section images are taking about two hours to render so there are a few days to go. 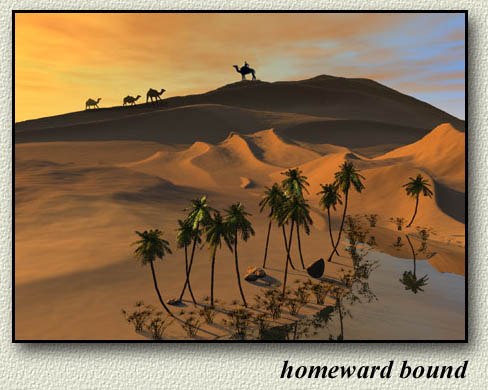 This all started when I came across a shot I took in Saudia Arabia of three camels crossing the desert. They were cut from the background and used for the subject of this desert Vue image. 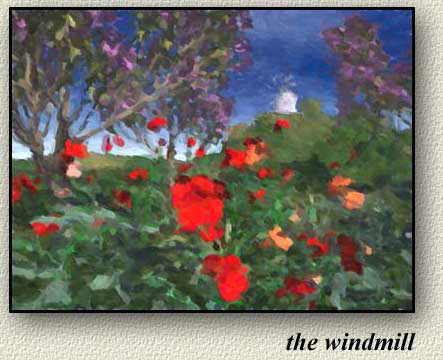 The original Vue image was post processed in Photoshop to give the painting effect. The Art History brush was used for the effect with a bit of embossing added.

The windmill came from a still shot taken in Greece in 1974. The pic was mapped onto a plane. 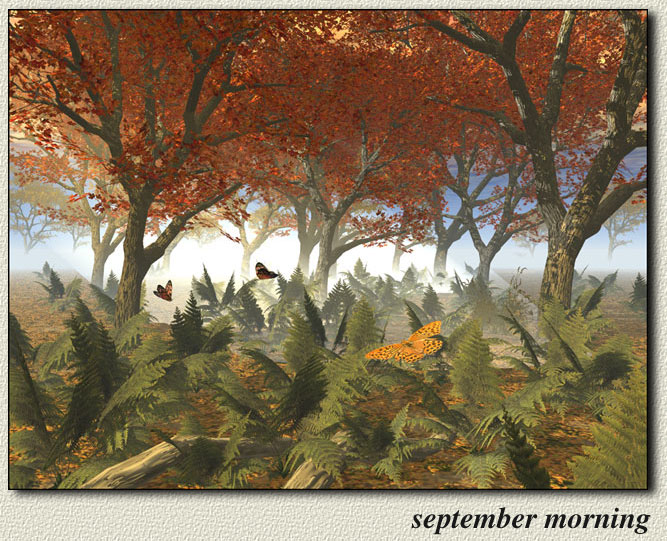 Based on one of the final scenes of the opening animation of Fractal Quest the image is lit by five extra spots and the last of the butterflies are planes mapped with some of my butterfly images. 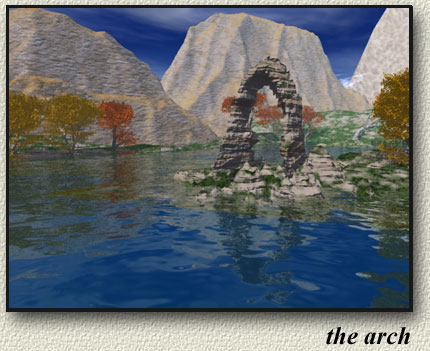 The camera flies through the arch-well you wouldn't expect anything else would you!

We are now at frame 570 and after the arch the camera bears right ,changing direction once again. To reduce the size of the Vue file as the animation advances objects already rendered are deleted and a new file saved. Never delete the old Vue files- you may change your mind about something ! 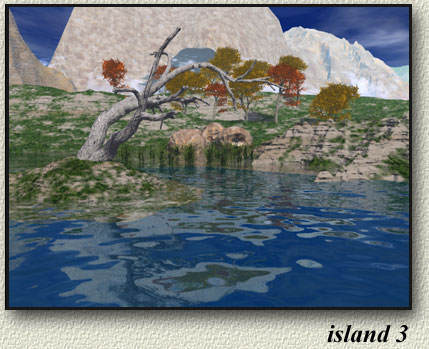 The camera flies near the old tree - just avoiding it! and then over the rocks and trees towards the distant mountains. The tree is at about frame 700. Rendering res is 768 x 576 and each frame takes about an hour on a 233 at this stage. 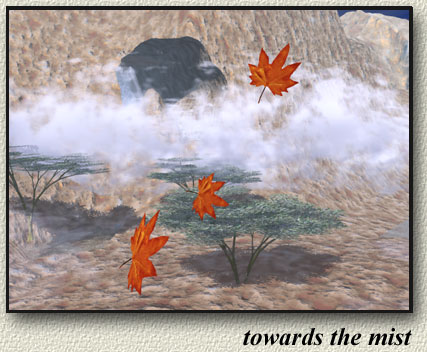 After the camera flies over the trees three leaves leave one of the trees and now fly with the camera on our journey. We are on frame 900 and about to fly through the mist and into the cave in the distance. Because of the mist frames are now taking a couple of hours
This page was put together many years ago (about 2000) and of course it's a bit out of date!
This image comes from a DEM of Monument Valley .It is of the Mitten and Merrick Buttes looking North. The DEM was loaded into Wilbur and transferred to a 5 meg BMP file. This was cropped square in Photoshop to give a 2048 x 2048 pixel file and loaded into the terrain editor of Vue. Tree and sparse vegetation is from Vue which is limited in its direct import of DEMs.
Most of Monument Valley is in North East Arizona with a bit in SE Utah.
Home
Back to Dig Landscapes
Back to Comp Graphics

A relatively new landscape programme from France which I have not had for too long. The images below are the results of my first efforts. It is quite a flexible programme with good animation features. The quality of the 3D vegetation is very good and there is an extensive variety of materials and atmospheres. It looks to be a good rival to Bryce. Version 4 is about to be launched which will further improve the programme.