first became interested in digital landscape programmes quite a few years ago when I was using an Amiga 2000 and the very first programme I came across was Scene Generator from Natural Graphics in 1989- I have the original 12 page manual in front of me. Now ten years later there is a new programme from the same software designer - Natural Scene Designer 2.0 which is available for both Mac and PC. Details from
http://www.naturalgfx.com

About the same time -about ten years ago came the early version of Vistapro for the Amiga - Vista 1.0 from Virtual Reality Labs- the manual went to 40 pages - wow ! The specs were pretty basic in those days. In 1992 Vistapro2 for the Amiga was launched. Animation was pretty basic but we did have trees ! A year later came Vistapro3 with versions for both the PC and Amiga with major improvements. At this time Vistamorph came out which added to the excitement.A few years later Vistapro4 hit the streets but with a new distributor . We lost the morph and makepath extras and there are no signs of any further advancements to the programme at the moment. The main landscape generators these days are the five at the top of the page and there will be examples on the relevant pages.
Other programmes are as follows
AMAP landscape modeling application - includes Genesis plant growth programme which is very extensive but also very expensive. Genesis is also available as plug-ins for Maya and Softimage. Trees and plants can also be exported as DXF, LWO, OBJ and 3DS. Details from
http://www.jmg-graphics.com

MojoWorld - new on the scene - demo available from site below
http://www.pandromeda.com

World Machine - is a new terrain generator. you can export as a 'Ter' for Terragen or as a TGA for importing into Vue. It has an interesting method of producing landscapes and the results are very good.
http://students.washington.edu/sschmitt/world/

It's a little unfair to contrast the various programmes but below are four images from the same basic file which originated in Vistapro. They all had similar lighting and a similar camera position. The texture mapping of all four differ greatly 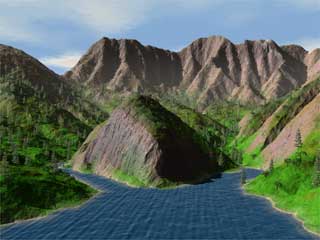 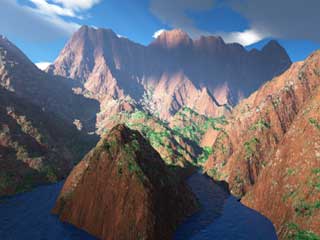 Vistapro was used for this version of the DEM. No post production used. Trees were added within the programme.
For this version Terragen was used and there was a little punch added in Photoshop and the height of the Terr file had to be squashed 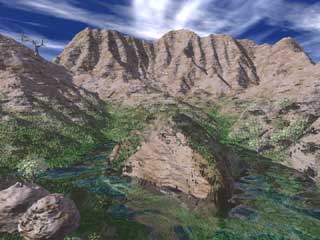 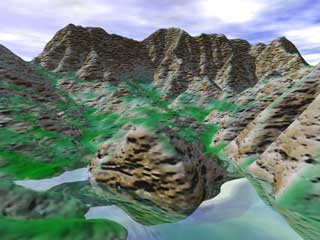 Vue D'Esprit imported the BMP export from Vistapro and some trees were added from within Vue. Water reflects both sky and landscape.
This is the Bryce 4 version. Water reflects both land and sky
Most digital landscape programmes have several methods of generating landscapes.- a controlled internal system, a fractal generator (hit or miss) , the possibility to import DEMs (digital elevation models) and some will allow you to import an image which will act like a DEM.. There are several types of DEM. The most popular a few years ago was the type that was imported into Vistapro and with the programme came a CD that was packed with DEMs of most parts of the USA. The latest version of Bryce will import Vistapro dems without too much trouble but some of the others won't. Terragen cannot import dems directly, only via other programs but is capable of quite realistic results. The three images below are from a DEM of Grand Canyon. 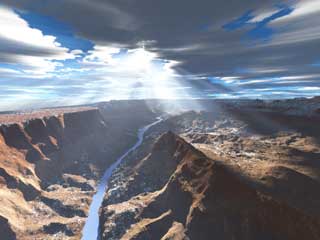 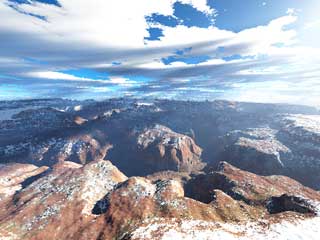 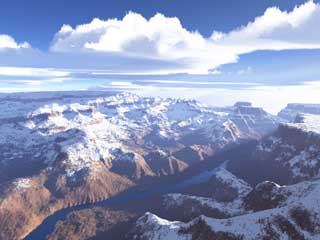 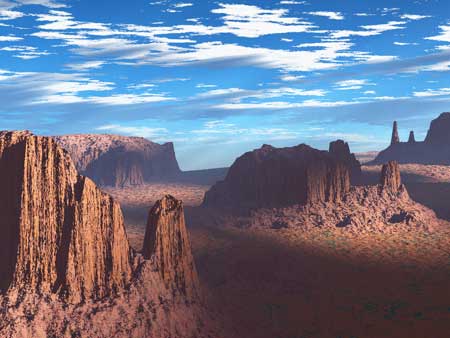 The above images ( put mouse over image for different lighting ) are from the Monument Valley DEM mentioned later on this page. This view is taken from a point just north of Spearhead Mesa looking SW with a 55 mm lens.

Though the DEMs are quite detailed I was disappointed I could not find my tripod marks from when I was there in 1983 ! Ah the ravages of time. To get the DEM into Terragen the original Mitten DEM was loaded into 3DEM (see ref later) and saved as a TER file at 1025 x 1025

Many of the landscape progs have the ability to import objects and trees etc and while some of them have quite a range of trees and plants within the programs there are specialist programs to grow your own !

Another top performer is Tree Druid which comes as a plug-in or as a standalone programme. Info from Hutchinson Avenue Software Corp

A more economical programme is Tree Factory from MECN Graphics. My copy is some 5 years old so I don't know whether it is still available and I don't have a web address.

For plants try Plant Studio- http://www.kurtz-fernhout.com. You can download the demo version for free from the above site and registration for the full copy will not require a remortgage.

For architectural 3d trees and plants have a look at Nsight3D - http://www.nsight3d.com

Yet another plant and tree modeling programme is Xfrog - http://www.greenworks.de


For those with an unlimited budget have a look at Maya Paint - http://www.aliaswavefront.com/entertainment

DEM (USGS Digital Elevation model) files are digital representations of cartographic information in a raster form. They consist of a sample array of elevations for a number of ground positions at regularly spaced intervals.They come in different sizes - 7.5- minute,15- minute, 2-arc seconds and 1 -degree units. The first two are in the large scale category, the 2-arc seconds (also known as 30 -minute) is intermediate and the 1-degree DEM falls within the small scale section. For more details look at
http://edcwww.cr.usgs.gov/glis/hyper/guide/usgs_dem

1 degree USGS DEMs can be downloaded from http://edcwww.cr.usgs.gov/glis/hyper/guide/1_dgr_demfig/index1m.html

7.5 minute SDTS DEMs can be downloaded from
http://edcww.cr.usgs.gov/bin/maptest/coords=55+-130+20+-65/scale=24/type=dem/zoom=8
Note that the 7.5 ones are downloaded in the *.tar.gz format
There is a useful conversion tutorial at http://www.cherba.com/wcs.htm

Another Dem reference site is Map Mart at http://www.terrasource .net

Leveller is an inexpensive terrain/heightfield modeller. A demo is available from
http://www.daylongraphics.com/products/leveller/index.html

programs of interest to users of Terragen

3DEM70 and 3DEM80
used to merge and transfer DEMs to Terregan files
http://www.monumental.com/rshorne/3dem.html

The above image was done in Bryce4 of Monument Valley in Utah from a DEM downloaded from ftp://ftp.agrc.state.ut.us/10meter_dem.
The reference to the various buttes is A - East Mitten Butte B- West Mitten Butte C- Merrick Butte
D- Spearhead Mesa EFG- Windows H- Mitchell Mesa I - Rain God Mesa
J - Thunderbird Mesa K - Totem Pole
There are also some images on the Vue D'esprit page from the above DEM.
For a general look at Utah try ftp://agric.state.ut.us/geodata.htm 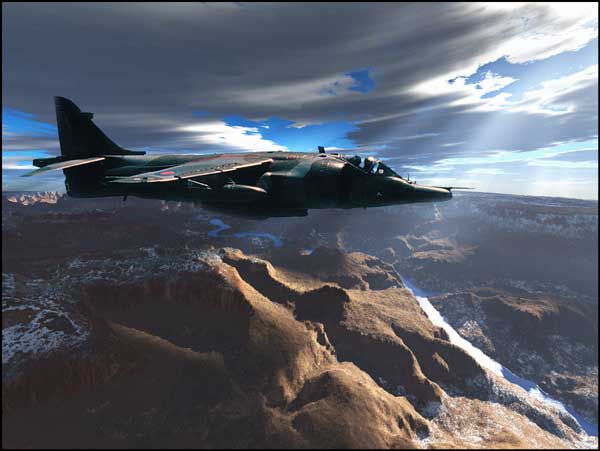 The above image is a combination in post production in Photoshop of a background produced in Terragen from a DEM of Grand Canyon and an air to air picture I took a few years ago. The shot of the Harrier was taken when I was doing a job for the army and we were coming in to land at Belize. I looked out of the window and was surprised to see the Harrier coming 'alongside' to give me 'an escort'!.
I remembered the lighting was similar to the 'Grand Canyon ' picture so the aircraft was carefully selected and copied and then pasted onto the background.