For just over 60 years I have been visiting this extraordinary place of dreams and of course a few nightmares! Sunday May 11th 2003 was the occasion of the very last major game at Maine Road and I got there early to soak in the atmosphere and catch more memories on film and video. What follows will I hope bring back memories of the occasion and now I can't wait for the first game at our new stadium.

Gio is introduced to the crowd (5.3 megs) 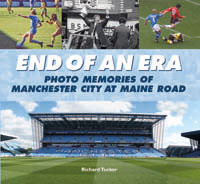 NEW
Back to City
City 2009-2010
Back to City Past
Man City Links
Home
Now got a publisher for the book on Maine Road.
It's now available from Amazon -click on image for link and in the Club shop
wn

The above AVI's will need a DivX codec to run (www. DivX.com)