Return to the UK took me to Norwich and I refereed in the Norfolk and Suffolk league but a bad knee injury brought my refereeing career to an abrupt halt, my only experience at a football league ground being an F.A. Cup game at Stockport County's ground. I had been on several FA coaching courses and following coaching and managerial experience in the RAF I took on a part time coaching/manager job with Northern Nomads an amateur side playing in the Lancashire Combination. I also continued my part time sports writing for the Hong Kong Tiger Standard covering Internationals, Cup and league games. I had written many articles on refereeing using the name - Whistler and general football ones using the name -Corinthian

I took the picture above a couple of days before the game shortly after I arrived in Taipei and was astonished to find work still going on to finish the stadium in time for the game. They were still laying some of the turf !

Another slight problem was that neither of the two Chinese linesmen could speak a word of English and with my limited knowledge of Cantonese the instructions before the game through an interpreter were lengthy to say the least.
I must have been one of the youngest referees to have officiated at a FIFA game being in my mid- twenties.

I also had the good fortune to referee two FIFA Internationals in the Asian Cup - Vietnam v Israel and Nationalist China v South Korea and the Hong Kong Shield Final in 1957. The game between Nationalist China and South Korea in Taipei was the first game played in their new stadium just prior to typhoon Diana arriving. Intermittent rain and winds made conditions difficult . Korea were two up after the first leg so to qualify for the Asian finals China had to score 3. Aided by the wind China scored in the first half, and missed several other chances. With about 20 minutes to go I awarded the Koreans a penalty for hand ball. The 20,000 crowd fell silent! I was grateful for the armed soldiers around the ground ! However the Koreans scored again in the last minute to win 2-1. A friendly match had been arranged for the following Wednesday which I was again to referee, but typhoon Diana took over. The typhoon wrecked the stadium, blowing the roof off the main stand and I spent my time behind closed shutters in the hotel peering at flying debris and wondering whether I would ever get back to Hong Kong. 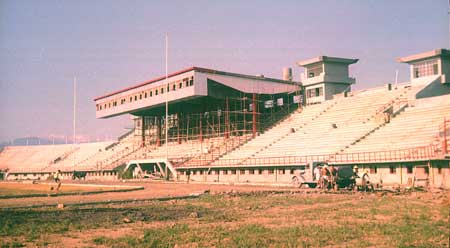 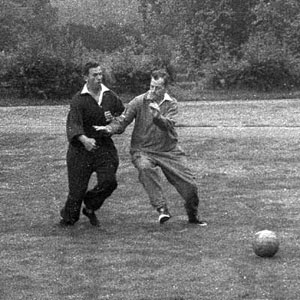 This shows Walter Winterbottom the ex England manager demonstrating obstruction at an FA Coaching Course I was attending.
I was soon to discover that I would never earn my living as a professional footballer so I decided early on to have a go at refereeing. My RAF service moved me around the country and I officiated in the Midland, Northern and Hampshire leagues before I was posted to first Singapore and then Hong Kong . By then I had got my Class 1 so I was able to start refereeing in the Hong Kong league. To keep busy I also managed/coached the RAF side playing in the same division

I rarely had the chance to take any pictures so the image above from one of the RAF games is a bit of a rarity. 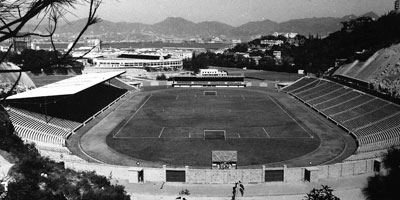 It was during my stay that the 30,000 all seated Hong Kong Stadium was opened and in addition to refereeing league games there was the bonus of refereeing games involving visiting sides from overseas - India, Malaysia, Austria etc
Pic on the right shows Ho Cheung -Yeu captain of All Hong Kong and Barschandt the Austrian international. He had been sent off against Scotland the week previously but on this occasion he behaved impeccably in Weiner Sportklub's 5-1 win

I had the honor of refereeing the Hong Kong Shield Final in 1957 between great rivals South China and KMB the two leading teams in the league. The first game, watched by a packed stadium ended in a 3-3 draw after extra time. The replay ended in a 6-2 win for South China. 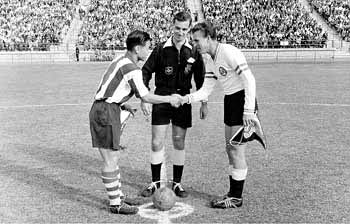 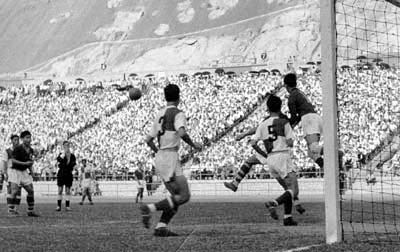 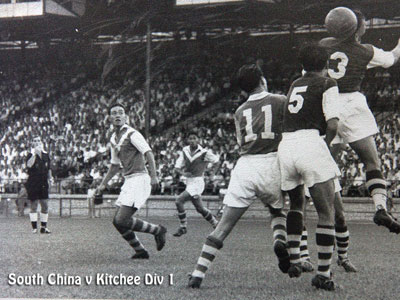 I had the rather unique experience of both being a coach and referee in the same league!
I some how think this would be frowned upon in the Premiership! 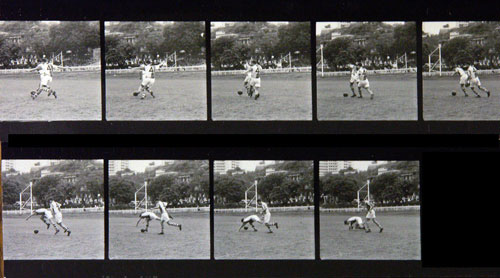 It was about this time that my interest in photography grew and obtaining one of the first cameras with a type of motor drive I was able to capture sequences of images that were used for both coaching and referee training purposes. 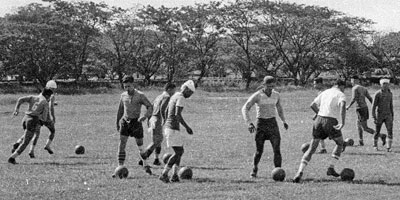 I also achieved a 'kind of hat-trick ' at Wembley - being there as a spectator. steward and in the press box! 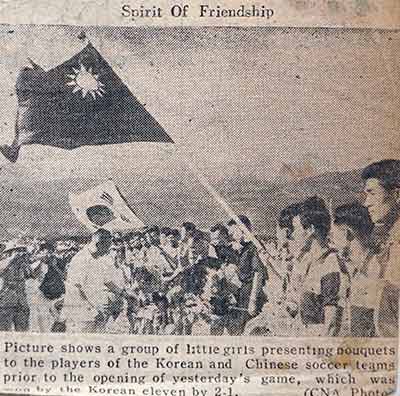 Above is a cutting from a local paper before the game and in the pic on the right I am being presented with some flowers! 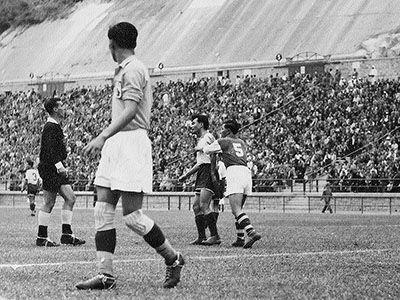 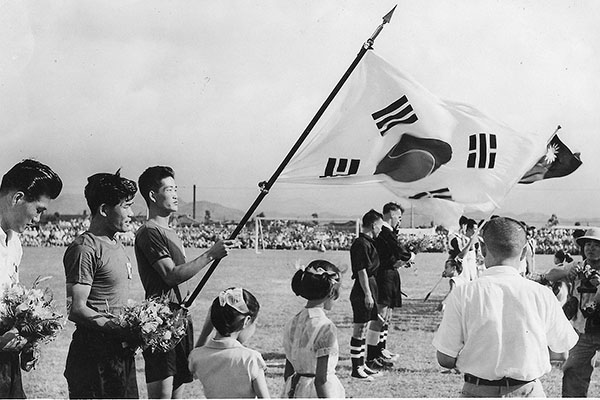 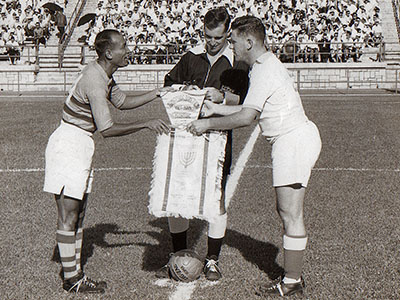 10 days later I refereed the Asian Cup game between Israel and Vietnam in the HK Stadium. Israel won 2-1 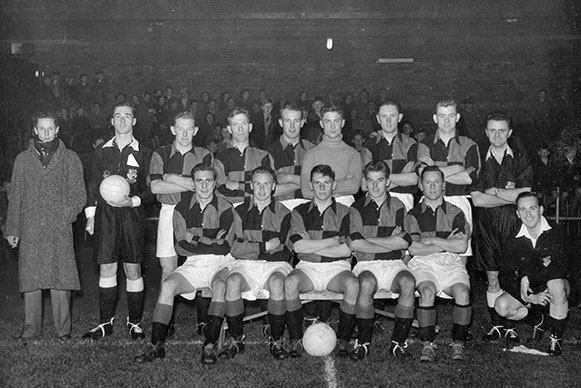 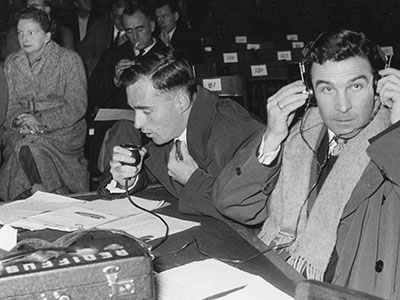 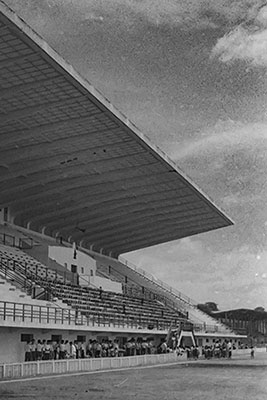 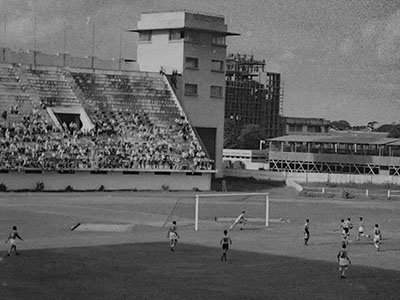