I was involved in multimedia for many years, at first producing slide tape sequences for both the amateur and professional world. I first got hooked on tape slide in the late 60`s after seeing a early Hi Fi show with slides. In those days there were no wonderful computer controlled devices. In fact my first device was a homemade cardboard , string and elastic band device. I only had one projector - a Leitz Pradovit so I used to do shows with a friend who had a similar projector. Eventually I bought a Duofade, an excellent 2 projector device which had controllable diapraghms in front of each lens. I also tried a Staysatom unit which was one of the earliest electronic dissolve units. Both these units are still working but have been relegated to the loft for safe keeping, perhaps they will feature on a future antiques road show ! Then came the Animatic / Diafade period the latter being a four projector unit. I used two of these for the 8 projector Nikon multi-vision series with Agfa projectors. The Diafade was the first electronic system with independent control of each projector. On the pro side I used Electrosonic units which were very reliable and then Doves. Later I used a Dataton computer system with Carousel 2050`s. For sound I used to use either my own 8 track reel to reel min-studio or a local professional studio when applicable. I later did the whole soundtrack on the computer using Cool Edit and later Audition
I worked at different levels depending on the job, sometimes providing the pictures only, sometimes doing the projector programming or ideally producing the whole programme.
As video gradually took over many of the roles carried out by slide tape I moved into the new arena first by providing computer graphics from a Spaceward system in an edit suite and later by producing videos for clients. I prefered to use Beta SP, hiring in a crew and editing in a linear suite though I did the off line edit myself and used a Targa 2000 Pro board in one of the computers with Speed Razor as the software . Times changed rapidly and digital video expnded at such a fast rate that any capital investment is fraught with dangers. The `home studio environment` however is becoming more powerful with the advent of faster computers, cheaper memory and better software becoming available. Powerful plugins such as Final Effects, Boris effects that can be used with both Speed Razor and After Effects allow high end effects to be achieved at a fraction of the cost of what was available a few years ago. With the PC's getting more powerful by the week and the launch of the lower cost SGI`s the future is very exciting . The limit is your imagination. 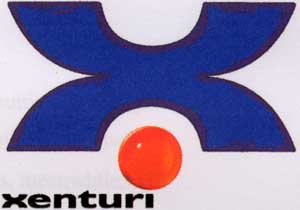 A new multimedia authoring programme due to be launched at the Digital Media World exhibition at Olympia shortly (November 14-16th 2000 ). Click on logo for further info.
Golden Oldie