One thing is certain. This is the last time we shall City enter the field at Maine Road in Division One. After the celebrations of the last home game when it was certain City would be in the Premier League next season it must have been difficult for the players to raise their game for this match with Portsmouth. The ground was filled to capacity and with the fans from Portsmouth relegated to one of the open areas it was the highest gate of the season.The feeling at Maine Road this season has been so different this season. The smiles on the faces of the City supporters and the removal of the usual stress symptoms have probably saved the NHS some money! 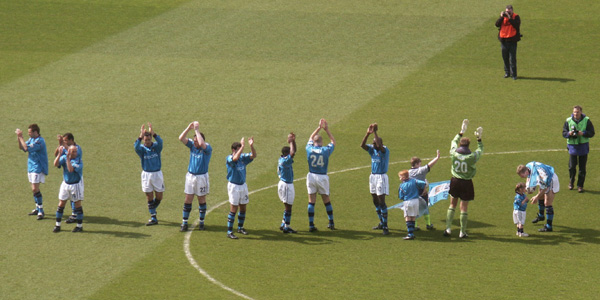 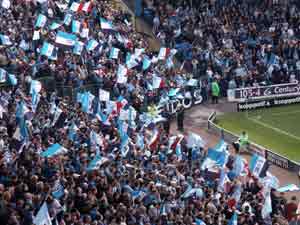 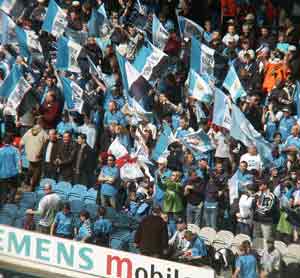 Blue and white flags were out in force throughout the ground 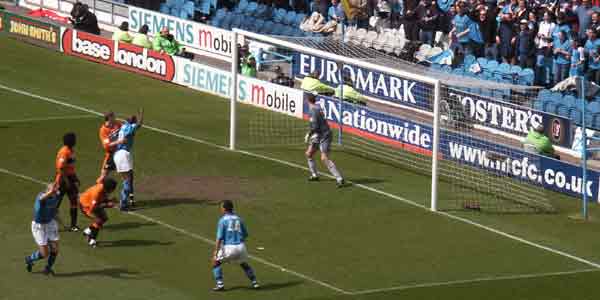 The fans paid homage to Stuart Pearce every time he took a corner and with him playing his last game at the age of 39 and his goals total in his career standing at 99, every time he got the ball, the crowd shouted - shoot !

As early as the 8th minute one of these corners lead to a goal. The corner Pearce is about to take was cleared by a defender and came back to Pearce. His centre was the glanced past veteran goalkeeper Dave Beasant by Steve Howey- below. 1-0 and the total for the season 106 .
A great header by the City defender and his third of the season and the City players rushed to add their congratulations 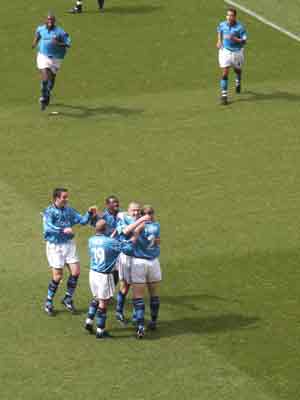 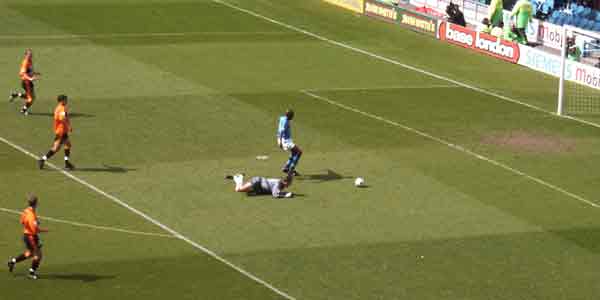 City piled on the pressure so it was no surprise when they went further ahead in the 26th minute .A great through ball from Ali Benarbia (who else ) found Goater 1-1 on 43 year old Dave Beasant and the Portsmouth keeper made a real has of the save leaving Shawn Goater the easiest of chances - below - 2-0 at half time and a total of 107- two to beat the record. It was Goaters's 32nd goal of the season 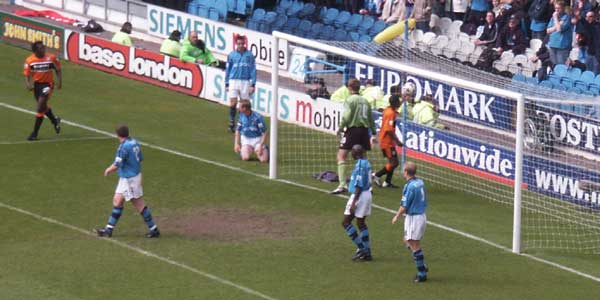 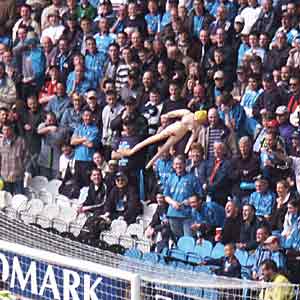 Much to everybody's amusement a large doll was passed around spectators in the North Stand.
In the second half a few chances went astray and it was a surprise when Portsmouth scored. A corner from the left somehow found its way into the City goal the scorer was Courtney Pitt. Slack marking and loss of concentration cost City a goal after 60 minutes.. Steve Howey had just been substituted by Wiekens and shortly afterwards Berkovic came on for Tiatto and Macken for Goater. 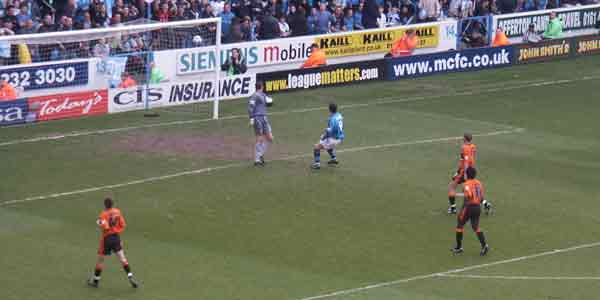 Berkovic and Macken were involved in City's third goal after 86 minutes. Berkovic was the provider,his final ball being flicked over Beasant - above. 3-1 and the record equaled. Only four minutes were left on my stop watch. 90 minutes came and went and we were into extra time . Then two minutes into added time there was a hand ball in the area and to the great joy of the City supporters a penalty was awarded. Who was going to take it - well only one choice- Stuart Pearce 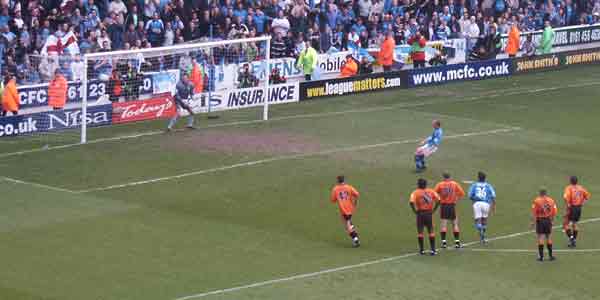 I would have liked to report that Pearce scored from the penalty reaching 100 goals and City broke the record of 1926-27 but alas the ball sailed into the Platt lane Stand .
There was more extra time than in the Gillingham Final so the referee gave Pearce plenty of time to get his 100th but it was not to be . Now the celebrations began 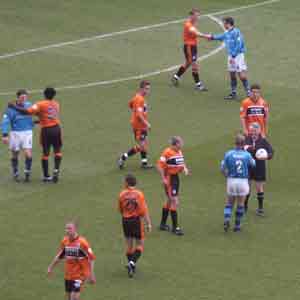 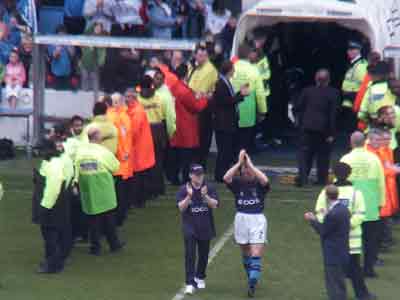 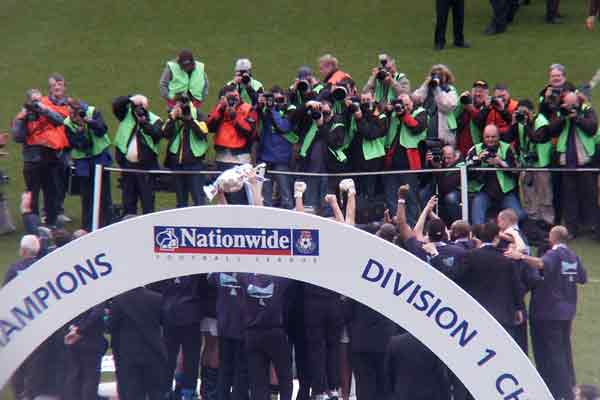 Above the Nationwide Logo is held the Division One cup as the worlds press take the picture that will be in the papers and magazines. 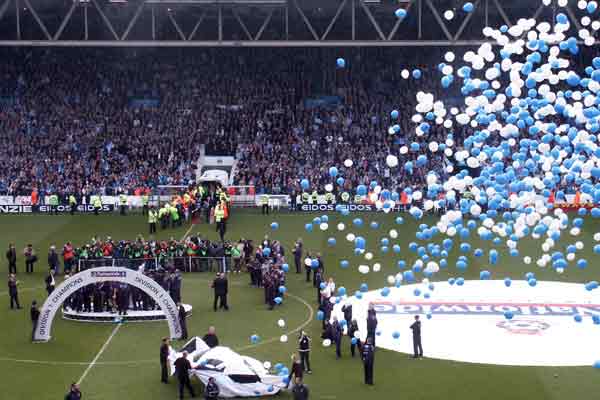 Summary of Season
What a magnificent season it has been under Keegan. Who would have guessed after the events of a year ago when the final game was lost against Chelsea that we would have been back so quickly. So how has this turnaround been achieved?
First and foremost a decision by the board before the summer recess really started to replace Joe Royle with Kevin Keegan as manager, was the key. A change of direction by the club to a more attacking style and some wonderful signings paved the way to a record season. Lets face it, 99 points , 108 goals for and a great goal difference (56 ) and 19 home wins is a pretty emphatic way to become worthy champion of the Division.
The signing of Ali Benarbia was a brilliant piece of work. His debut against Birmingham at home set a standard that he kept up throughout the season and as a goalmaker with his final killer pass he must rank among the best ten in the country let alone Div 1. He is my player of the season by a mile
Now for the rest -
Carlo Nash - has not let the side down when he played. His distribution was pretty good and his ability to deal with crosses was adequate. -7
Nicky Weaver - was lucky to regain his place for the Ipswich Cuptie and with his only average distribution and lack of dominance in the box when dealing with crosses coupled with his alcoholic adventures means he may not make the grade next season. With Peter S likely to make first choice he may end up being transferred. - 6
Steve Howey - now 31 and perhaps not as quick on the turn as he used to be may find it difficult in the Premiership. He played well this season and scored the odd goal from corners - 7
Richard Dunne - surprisingly quick for his size and often skillful he will probably stay next season. He will be in competition with Mettomo - 7
Stuart Pearce -his last season in football and how well he played for almost a 40 year old.His drive will be missed on the field and it will be difficult to replace the skipper - 8
Niclas Jensen - another good signing.who was virtually an ever present since his debut in January.Goes thorough the game almost unnoticed but his passing is very accurate and does his job efficiently.- 8
Shawn Wright-Phillips - has done amazingly well this season. Learnt a lot playing with Ali B and Berkovic and now has tremendous confidence. Since Christmas his game improved out of all recognition and once he broke his goal scoring duck he was shooting from all angles. His running at opponents, speed and defensive work will keep him in the side - 8+
Kevin Horlock- playing behind Berkovic and Ali B in midfield has suited his game though he has still been able to score 8 goals. Whether he can keep his place next season will be questionable but this season he really improved a great deal and deserves a chance in the Premiership.- 8
Eyal Berkovic - the Israeli international had a mixed season.He missed several games through injury but when he did play he was always dangerous and like Benarbia was able to make goals with a final pass.- 8+
Danny Tiatto - whereas last season Danny was the best player this season he had more competition and his collection of yellow cards and suspensions did not help the team. He also had to play a different kind of game in midfield so he did not shine like he did lest season- 7
Lucien Mettomo - his absence when playing for his country in the African Cup cost him a regular place. He looked pretty good before Christmas and will be a useful player next season.Has plenty of pace and a good tackler.7
Paulo Wanchope - 12 goals in 14 league appearances is not bad going. His absence playing for Costa Rica and his injury deprived us of his magic. His skill and unorthodox approach will be useful next season- 8
Shaun Goater- 28 league goals in a season is pretty good and he missed many more. In fact in the last few months he has been off form a bit and next season he will be 32 so he may not be a first choice.7+
Darren Huckerby - 20 league goals was a good haul for the speedy Darren whose running at defences caused great concern. How effective he will be next season against better defenders I am not so sure. He is caught offside a lot and needs to time his runs better, watching the line as well as the ball. He should be improving his peripheral vision to see colleagues in better positions.8
Jonathan Macken- has not yet enough games to get a feel of his power upfront. He is a different king of player than Goater and Wanchope and gives Keegan an extra option when picking the side.7
Ali Benarbia- one of the best players I have ever seen play for City. His speed of thought, accuracy of passing, ability to beat an opponent or two and general football nouse . He will be 34 for most of next season but is pretty fit and OK you are not going to see him fighting for the ball on the edge of your penalty area, but give him the ball in midfield and start to run and he will place it just right for a scoring opportunity. He must have made at least 50 goals this season and I would just love him to do the same next season -10