The residents of the North Stand at Maine Road give their heroes a warm welcome at the start of the home game against Barnsley. The defeat of Wolves at Millwall meant that City had won promotion to the Premiership and they needed just a point from this game to win the title.

City also needed just three goals to reach the 100 mark for the season in the league as they entered the 'Arena of Dreams'. 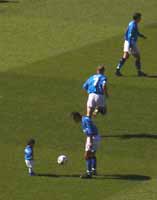 No, not a new signing for City but Ali Benarbia introduces his toddler to the fans.
The minutes silence for the death of the Queen Mother was impeccably kept. Perhaps she saw the great Billy Meridith play for City 100 years ago. 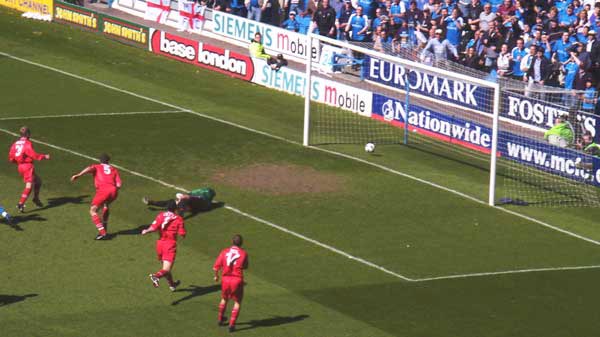 We did not too long to wait for the first goal. Ali B (who else) made it. A cross from the right gave Darren Huckerby the chance to crash it past Marriot and the' line dancing' Barnsley back four after 12 minutes - above. 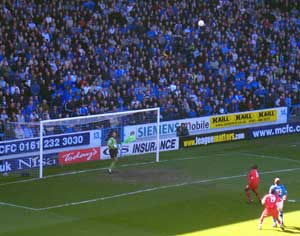 Barnsley gave City a shock 8 minutes later when a free kick from Lumsden rocketed against the City bar and rebounded into the air with Carlo Nash well beaten. 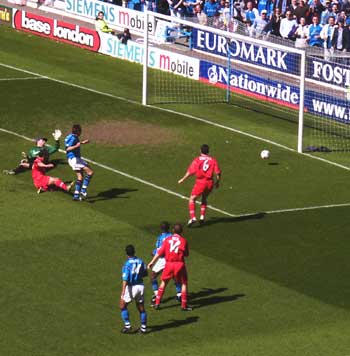 This looked like being number two but the ball was deflected for a corner from the shot by Huckerby set up by Wright-Phillips.

Incessant pressure by City brought their 99th league goal when good work by Macken and Benarbia gave Darren Huckerby an easy chance to score - below. That was after 35 minutes.

Barnsley got a surprise goal back just before the interval when a cracker of a shot by the ever dangerous Bruce Dyer beat Nash at the near post.
At half time we were still waiting for number 100.

City's 100th of the season deserves two pictures so here they are. In the 53rd minute Made by Jensen on the left - his final pass giving Macken an easy chance to score. Macken was making his full home debut after his transfer from Preston and his holding ability will prove useful in the testing to come in the Premiership.

A typical back heel by Ali Benarbia gave Darren Huckerby to complete his second home hat trick in successive games.It was a great goal started by a run and pass by Shawn Wright-Phillips in his own half. Brilliant stuff and there was more to come. 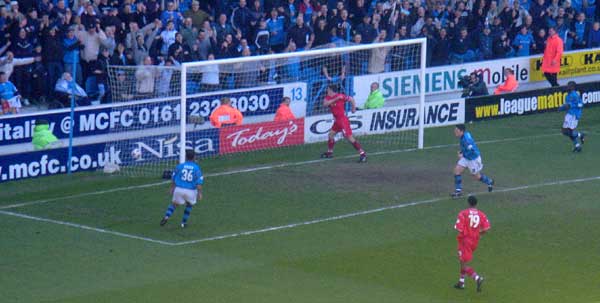 After 70 minutes City made it 5-1 when Macken scored his second following good work by Wright- Phillips and Benarbia. The rout was complete - now it was time for celebration. Man of the match was Benarbia with Huckerby a close second. 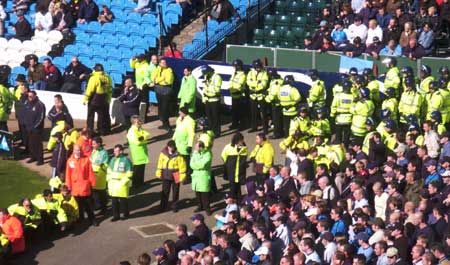 In the last twenty minutes or so a thin yellow and orange line was formed around the ground to prevent a pitch invasion. 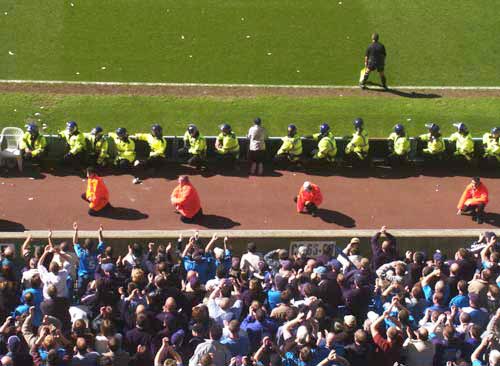 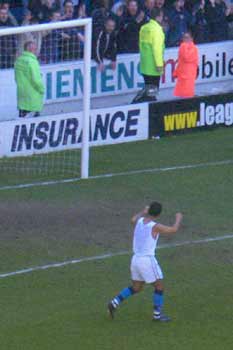 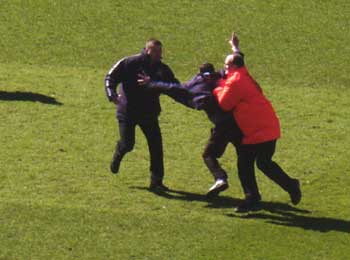 As the final whistle went Ali B gave his shirt to a fan in the Platt Lane stand who will no doubt treasure it for ever more, while one stupid idiot - the only one - I hasten to add, ran onto the pitch. He was dealt with quickly. 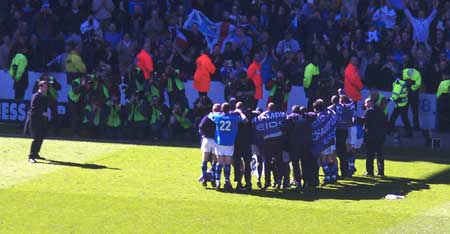 Here is the team being photographed by the press in front of the main stand. The shot no doubt will be in all the papers. 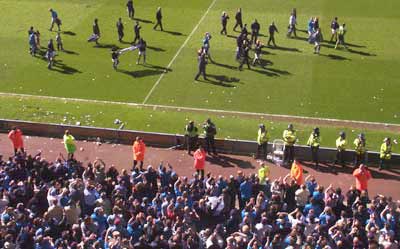 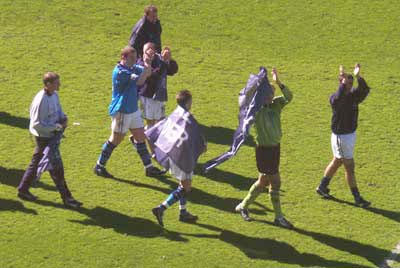 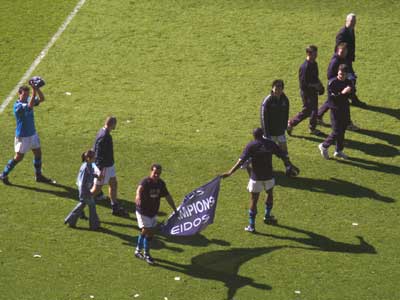 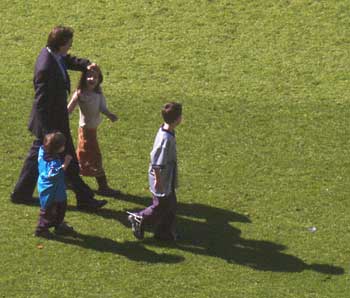 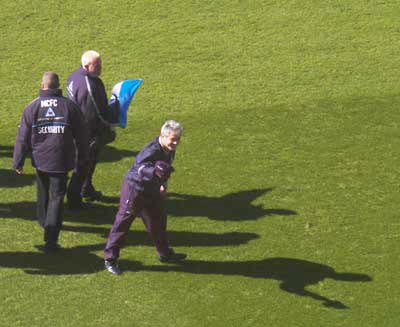 At the end of the game the players and staff went round the ground to give their thanks to the fans. Berkovic gave his children a chance to savior the occasion- above. We also had Kevin Keegan doffing his cap to the fans in the Kippax - left.

What now - two games to go - away to Gillingham and the final home game against Portsmouth to reach 99 points and beat the league goals total of 108 set in the 1926-27 season when City came third in Division Two. In that season City won their last game 8-0 against Bradford City but failed to win promotion by the narrowest goal difference ever 1.7705 against Portsmouth's 1.7755. I remember it well ! Oh no I didn't.
So how about sweet revenge by cracking nine past Pompey!